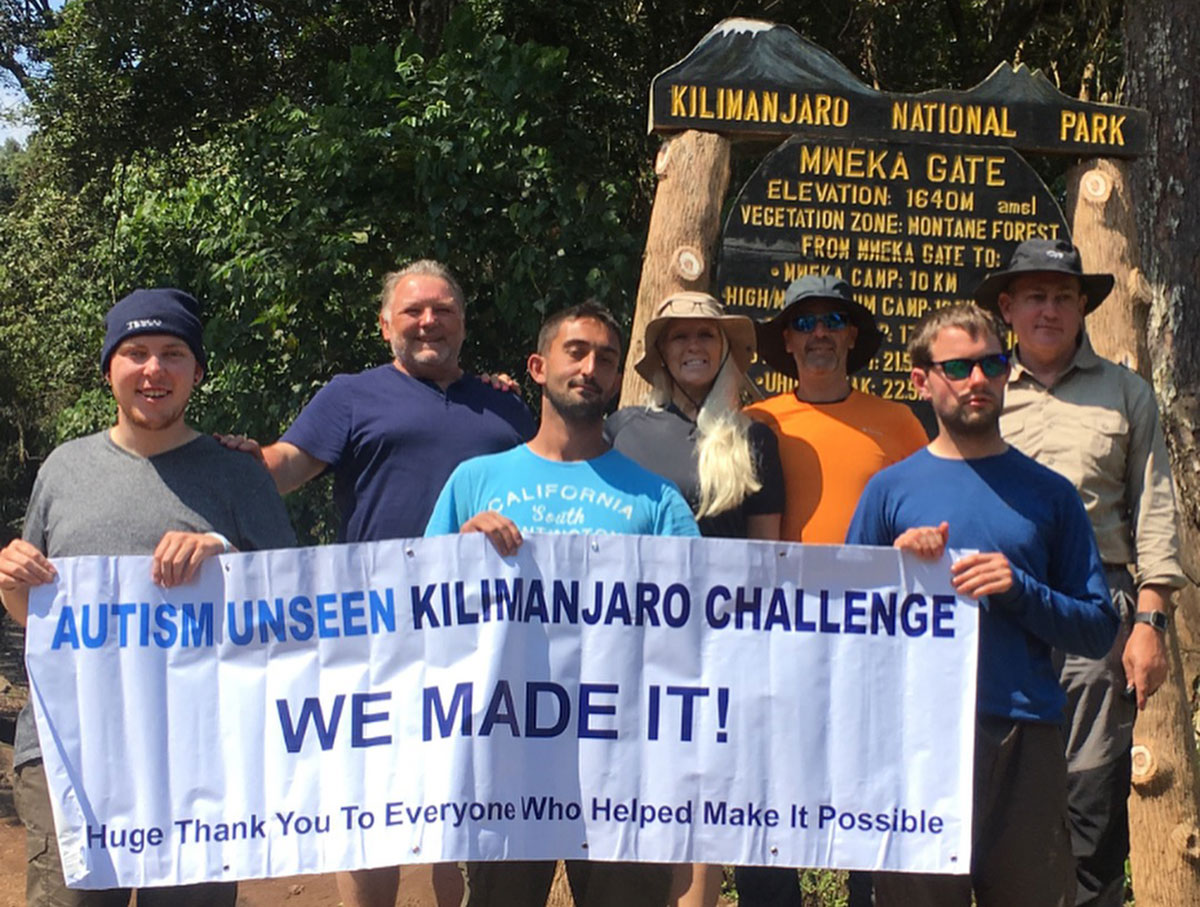 2017 was one of the toughest challenges ever for Autism Unseen, leading a team of Autistic Young Adults to climb Mount Kilimanjaro, the largest freestanding mountain in the world. This adventure was a once in a lifetime opportunity to stand on the roof of Africa, and the climb encompassed terrains from jungle to glacier. Reaching the summit and watching the sun rise over the vast African plains was truly an experience never to be forgotten. This epic adventure in addition to raising the profile of what it is like to suffer from Autism, also helped to raise funds for Dig Deep, who supply sustainable clean water to the remote villages of Kenya, thereby transforming the lives of local communities across East Africa.

At midnight on the 25th August, the Autism Unseen Kilimanjaro Challenge team left the Barafu Base camp, having had only 3 hours’ rest from an exhausting day of trekking the day before.  It was cold, below freezing, the tents were covered in ice, and each team member had just climbed out of their sleeping bags fully clothed and desperately tired. Yet despite the exhaustion, and the altitude (they were camped at 15,000 feet) this team of autistic individuals and carers were excited and eager to commence the final push, to reach the summit of Kilimanjaro, Uhuru Peak, 4,200 feet above them. Equipped with walking poles and head touches they set about  an almost vertical climb up a rocky, mountainous volcanic terrain. It was testament to the courage and fortitude of the autistic participants, Charlie, Max and Jonathan that they had made it to this point.

Five days of arduous trekking through 4 climatic zones, from jungle to icy wilderness lay behind them, including an incredible scramble up the 700 ft. Baranco Wall. This was one of the most enjoyable aspects of the climb; more so because of the achievement they all felt after they had reached the top of the wall, and looked back down to see what a challenge it had been. 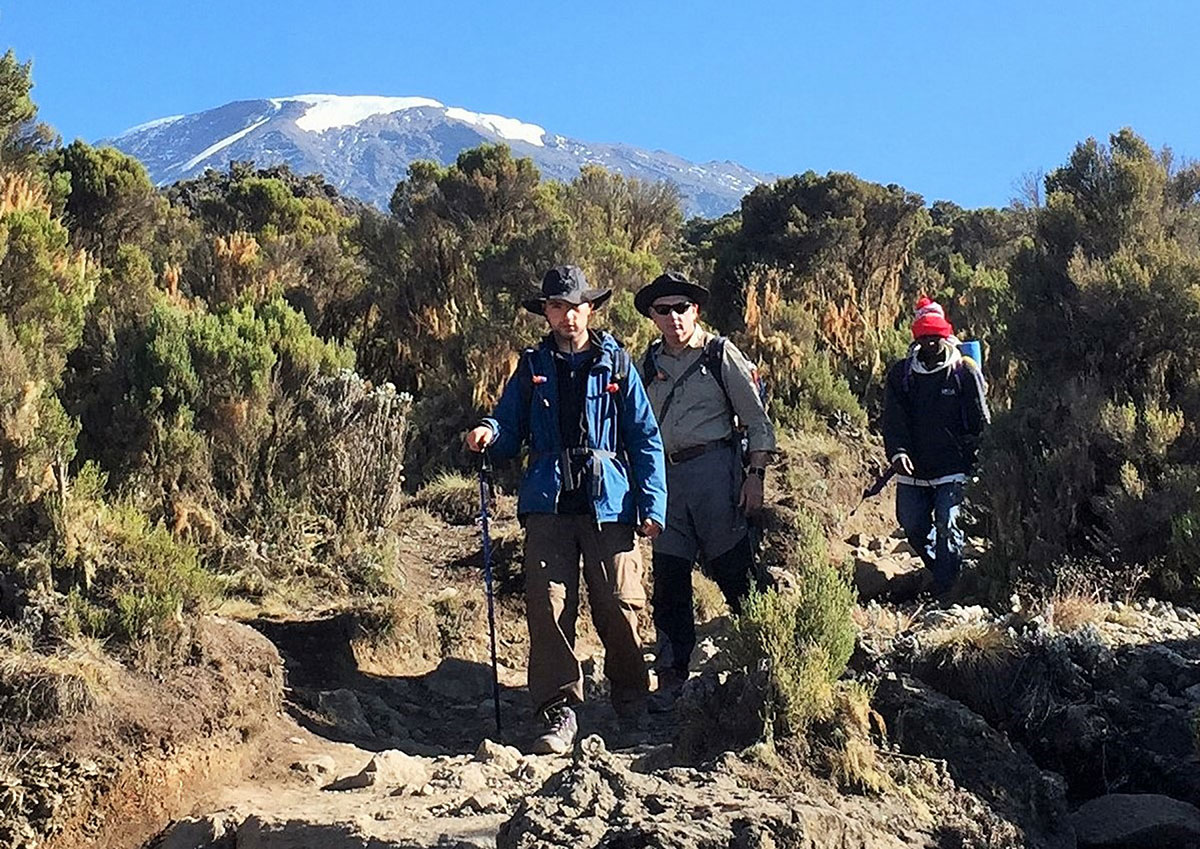 The team of three autistic individuals and four carers, had become one. Forging friendships that will last a lifetime. Throughout the previous days of trekking they had faced many challenges, that resulted in highs and lows, from the exhilaration of spectacular views across the Maasai Highlands, to the gut wrenching feeling, of discovering that a 500 ft. ravine lay between them and the next base camp, and that they still had another 3 hours hard trekking to traverse it.

Team members had tears and even the occasional tantrum, Charlie on day four, having trekked over 30 miles of rocky slopes, much of it in blazing sunshine, and totally exhausted, had sat down on a rock in the middle of nowhere, and demanded a helicopter to come and collect him. After much persuasion by fellow team members and the guides, and apparently a certain number of bribes and promises, Charlie put himself back on his feet, dug deep and continued his journey to base camp. 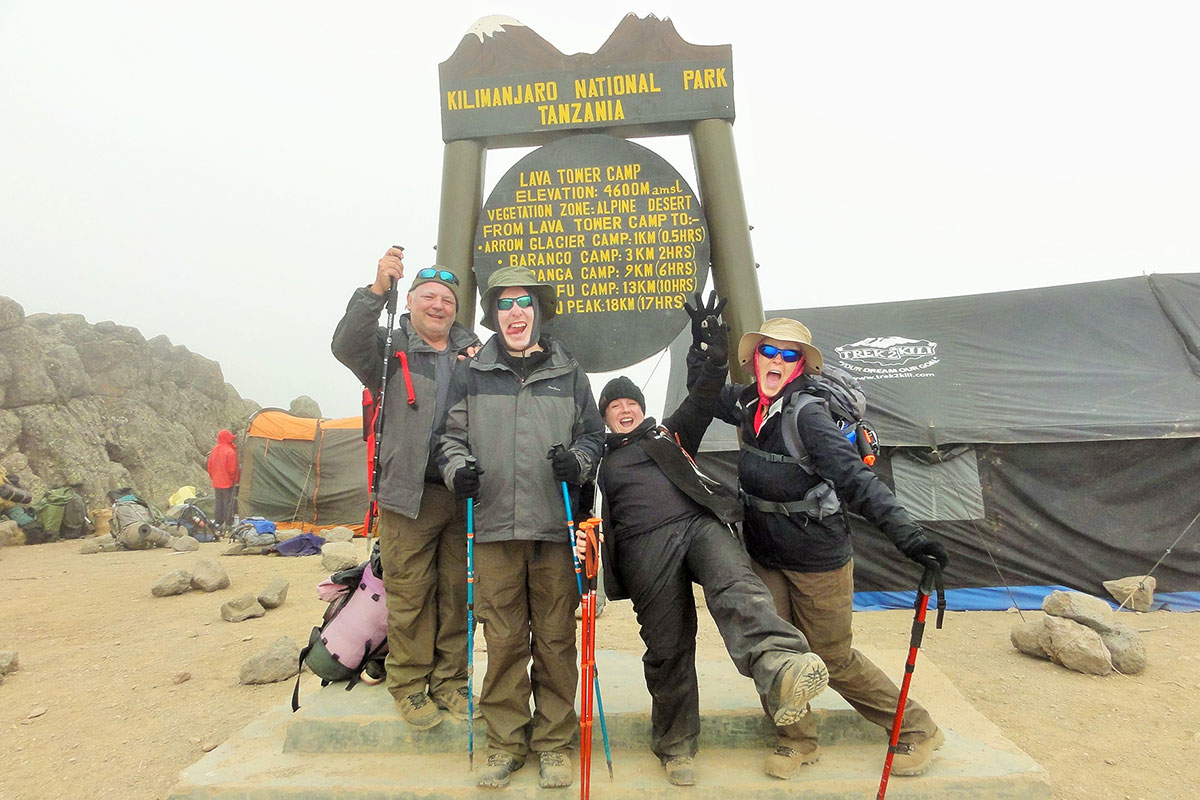 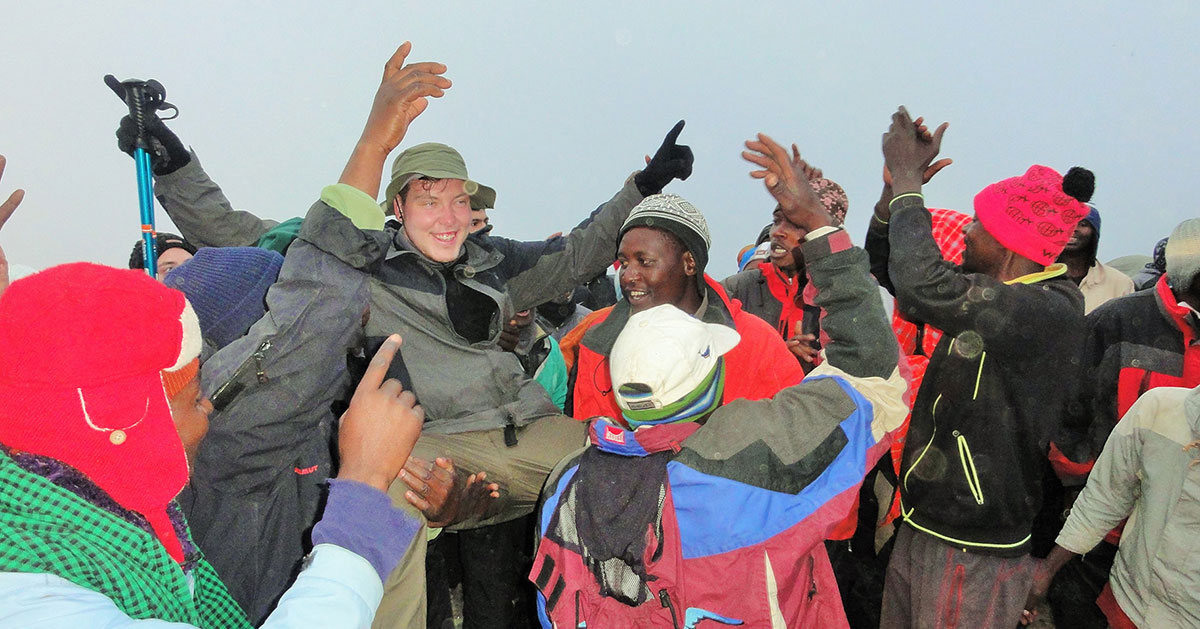 Such was the wonderful comradery of the porters and guides, who the team owed so much to, that upon arrival into camp, Charlie was carried aloft, and triumphantly paraded around the campsite, to celebrate not only his fortitude, but also his resilience for not giving up.

On the final ascent, after enduring five hours of extreme cold, biting winds, darkness, and frozen terrain, and just before Stella Point at 18,500 ft. Charlie succumbed to altitude sickness, and he had to turn back, returning to the lower altitudes of Barafu base camp for medical treatment, accompanied by his carer and two guides.

The remainder of the team carried onto the rim of the crater at Stella Point where they had the pleasure of witnessing perhaps one of the most memorable sunrises ever, with dawn striking the summit of the mountain, and the ‘Roof of Africa’ being laid bare before them. From Stella Point the team became strung out, with each individual being accompanied by two guides, for the 500ft. climb to the summit. This final part of the team’s epic journey was tortuous, the air was thin, each step was laboured and difficult, and it took a further two hours for them to reach the summit. However, the exhilaration of standing on Uhuru Peak made it all worthwhile. 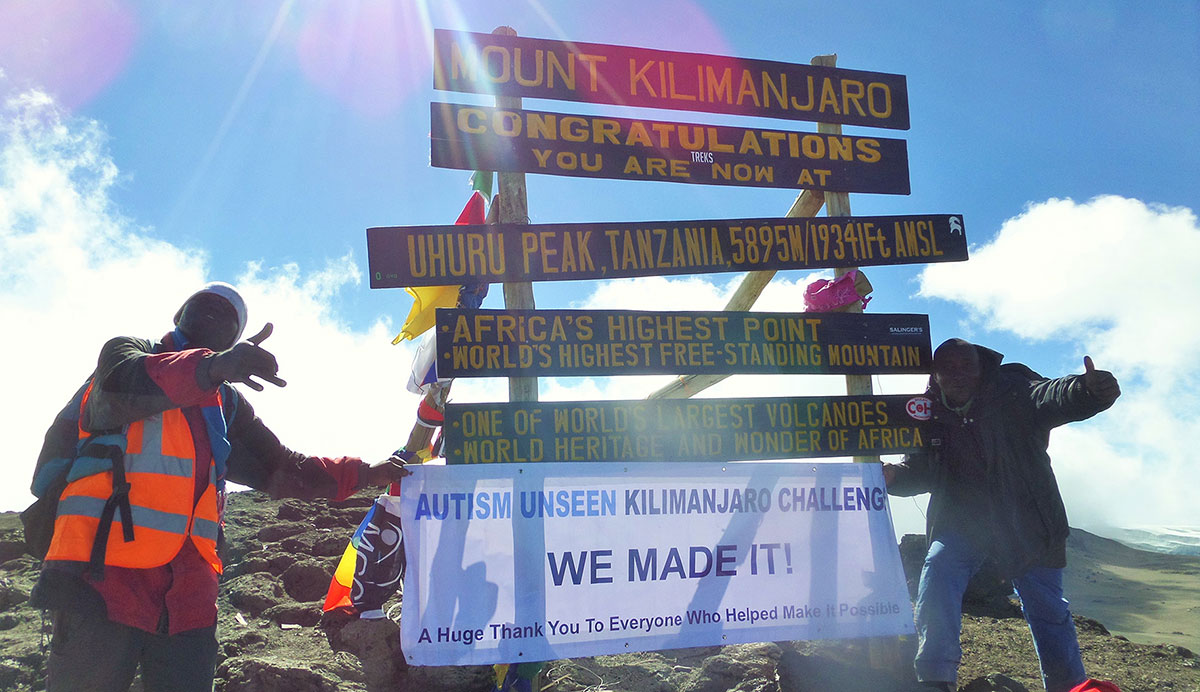 Once back in the UK, the team can look back at the photographs and videos and recapture the wonderful moments and memories had by all, the team spirit, the friendships, the laughs, the joys of becoming a family. Most of all, the incredible contribution that Charlie, Max and Jonathan had made to everyone’s life, not just the team of carers, but also the remainder of the group of climbers, made up of 20 University students from around the UK.

These three young autistic individuals will have their futures shaped by the experiences of travelling to Africa and climbing the largest freestanding mountain in the world. The journey was never about reaching the top, but about being part of a team, being socially accepted and taking part in an adventure that they will never forget.

A HUGE THANK YOU TO ALL OUR SPONSORS, TESCO, FUND RAISERS, AND THE GENERAL PUBLIC WHO CONTRIBUTED TO OUR RAFFLES AND BUCKET COLLECTIONS, WITHOUT YOUR KIND DONATIONS, THIS ADVENTURE WOULD NOT HAVE BEEN POSSIBLE